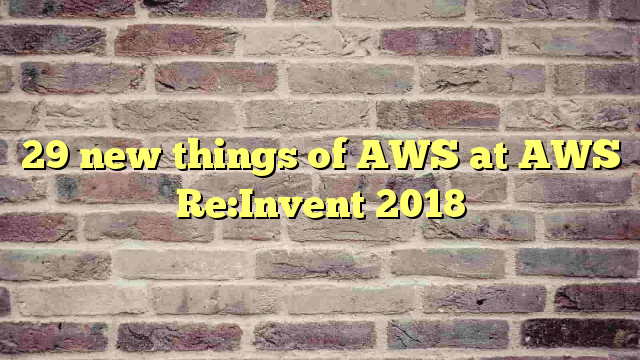 1. New ARM-based instances in A1 category. It supports upto 100 GBs of network bandwidth.
2. Now Linux VMs can be hibernated, so next time you wake them up, it will be quick to start your work.
3. Now you can bring AWS services to your own data center. AWS Outposts, which is expected to be available by next year, will be most awailted feature of AWS of rencent time.
4. Lambda services now can use Load Balancers for serving HTTP(S) requests.
5. Lambda Sandboxing is now easy with AWS Firecracker.
6. AWS Step Functions now integrate with DynamoDB, AWS Batch, AWS SQS and AWS SageMaker.
7. Lamda functions can use custom runtime. This opens the door for new languages.
8. AWS Global Accelerator has been announced. This service will help doing better netwok operations with TCP or UDP traffic withing AWS Global Network.
9. AWS Transit Gateway can be used to connect to multiple VPCs.
10. AWS App Mesh is a new offering for managing microservices.
11. AWS Cloud Map can help you to do service discovery.
12. S3 is not more intelligent. You can use intelligent tiering to handle objects which are not being used frequently. They can be moved to less costly optoins automatically.
13. To make custom retention policies, you can also lock a object.
14. File system based services like Amazon FSx for Lustre and Amazon FSx for windows has been announced.
15. AWS DataSync has been announced which can be used to sync data between different mediums.
16. Now DynamoDB is ACID compliant. You can do All or None kind of transactions in DynamoDB.
17. RDS Aurora for MySQL got Amazon Aurora Global Database which is cross region.
18. Amazon Quantum Ledger (QLDB) has been annouced for blockchain.
19. Lots of new features in AWS SageMaker.
20. AWS Lake Formation has been annouced using which you can create your S3 data lake from different data sources.
21. Amazon also annouced Managed Streaming for Kafka.
22. ML Insight can be used for predictive analysis.
23. Now Codedeploy supports blue/green kind of deployment.
24. S3 service can be accessed using SFTP also.
25. You can develope recommender systems using Amazon Personalize.
26. AWS RoboMaker can be used to develop, simulate and deploy robotic apps.
27. Several IoT services like SiteWise, IoT Graph, IoT Events has been annouced.
28. Amazon has annouced their own “Machine Learning University”
29. AWS Control Tower can be used to manage multiple AWS accounts and environments from single point.