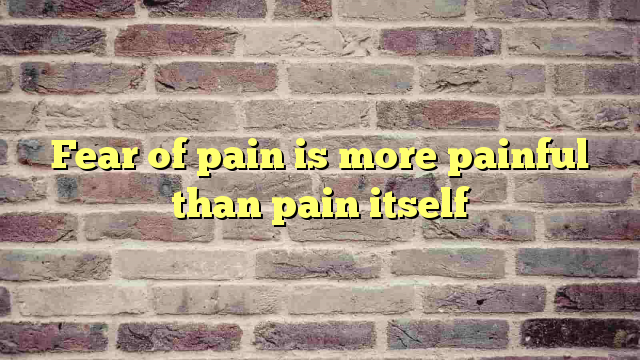 Fear of pain is more painful than pain itself

I normally dont write about my personal thoughts and life very frequently due to a simple reason that I am a professional and I am attached to many projects at the same time and I always fear that my personal thought or experience may be bad for my relationship with some of my colleagues or companies I am working with.

As a professional I had made a policy decision that I would resist myself from writing about my personal experiences about my work and projects on my public blogs.

As a professional I had made a policy decision that I would resist myself from writing about my personal experiences about my work and projects on my public blogs.

Although sometime it is really tough to do, especially on the projects when I am being forced to be quite by someone so called Boss or senior in the name of keeping good relationship with the client, which eventually dont happen because no client can compensate a bad work with a good relation. Sometime you need to speak up for the betterment of project. I specially find it more difficult when I think that I may add some value or eradicate something bad in process of project finalization or implementation and they just forced me to either be quite or just following them blindly.

My regular readers knows that I normally write about programming and general issues regularly on my different blogs and rarely write about my personals thoughts. Then why I am writing on my personal blog after such a long time?

In last five days I have gone through a specific period of my life when I face different aspects of mysteries of life and pain.

In last five days I have gone through a specific period of my life when I face different aspects of mysteries of life and pain.

I was in Munich city of Germany for a project and as a pure vegetarian (outside my house) I have some restrictions and reservation about food as a normal average Indian like me may have.

I cant eat the food source of which is not known to me and I cant eat any pork product so my choices were very limited in Munich. Before reaching Munich it was decided that I am going to use the combination of China and Italian food. (As a matter of fact I like china food a lot and Pizza is the only Italian dish I enjoy), In my view it was a decent choice without any major change in my eating habit or preferences.

(Please dont start a war about the origin of Pizza, I have very limited knowledge about its history but I enjoy it a lot)

But my colleagues who was with me had some other plans and decided to cook at home and he wanted me to be partner of it, reluctantly I agree (I really dont know how to say a NO).

Keeping story short everything goes fine but last Sunday evening a pain just grip whole of my stomach after the dinner, initially I thought that it may be some routine thing as I have taken the dinner lately .. I took some digestive pills but they did not work.

I even took the heavy pain killer which I keep with myself for my occasional ear pain. I tried every trick including prayer to God that please dont give me this pain as I just have five days to go to home.

BUT nothing worked and it kept increasing with the time. Just after one and half hour, First time in my life I was on an ambulance and then in the middle of a battery of doctors.

BUT nothing worked and it kept increasing with the time. Just after one and half hour, First time in my life I was on an ambulance and then in the middle of a battery of doctors.

They did every possible test in short duration of time, they found stones in my bladder but were not able to find any displace stone in my tummy or any infection caused by stones .. that whole process took more than one hour and during which I was just in pain and nothing else after that they start experimenting with pain killer  first a mild one  then more dose of it  finally when I beg them to use a stronger one they gave me a good one which bring some peace to my stomach. I was transferred to a ward and then I was in sleepy mode till morning.

In the morning a new fear came (apart from huge European hospital Bill) what will happen if the pain starts again Oh No and it started.. And it was not the pain in my stomach but really was more painful.

My hands were cold even on a thought of pain. Then I realize that fear of pain is more painful than pain itself. My boss suggest that I should immediately come back and I also support the idea  as I was the person who was really feeling the pain and more importantly project termed was going to finished after four days.

I took the leave of hospital against the advice of doctors; they made me sign some papers which I signed, although I was not able to read anything written on those papers as I dont know German language. (But fairly enough they provide me a copy of the document which I signed).

. Then started the great pain period On the Monday morning I was not feeling pain in my stomach or body but by evening it was in my whole body I even feel pain in my stomach when I breathe. Unfortunately company was not able to book the ticket to Delhi on the same or next day.

They book it with a gap of one day. I stop eating anything  I just feared that I may be again in the same situation of pain. It was difficult but I spent whole two days just on juice and milk and some biscuits.
On Wednesday morning, I had to rush to Munich airport; I was having my two bags full of my old cloths and accessories weighted more than 25 KG and a handbag with my laptop.

It was difficult and I feared that I may not be able to make it to airport easily.
Then things started improving suddenly God knows from where I got the strength that I was even able to use stairs to go to platform as escalator was not working on the central station.

Then I pick the train to airport but worst was waiting after crossing three or four station I realized that I left my handbag at central station But magic starts.

I jump from the train at very next station and pick the train back to central station while having my hands full with my other baggage.

God was really taking the tests of my strength on that day  in hurry I use the wrong side of the door to exist from the train and then had to climb and then down the stairs to go to platform where my bag was waiting for me Thankfully no passenger put the alarm on a not attendant bag.

God was really taking the tests of my strength on that day  in hurry I use the wrong side of the door to exist from the train and then had to climb and then down the stairs to go to platform where my bag was waiting for me Thankfully no passenger put the alarm on a not attendant bag.

Finally I reach the Munich airport suddenly I realize that no pain was there in breathing and my body was also not feeling any big pressure.

I resist myself from eating anything on plane to Zurich from where I was to board my connecting flight to Delhi.
After waiting for two hours at Zurich airport finally I board flight to Delhi. As soon as I reach the plane I feel a great sense of relief and suddenly I realize that I was not feeling any pain in my stomach even using a small test punch.

Then I decide to take the plunge I ate the food provided by them. And Yesno problemNo pain  I was at ease  the ease of life  ease of being towards home.

So what was the thing which I was experiencing since last two days specially after leaving the hospital against doctors advice?
If it was a medical problem how it disappear without any medicine or treatment and if it was not then how I have gone through such acute and unbearable pain? Doctors were able to find some stones in my stomach so I cant rule out a medical problem.
Then I decide to write about it and I found out that I was really suffering from a medical problem named fear of pain. It is a medical problem

After the first stroke of pain after my dinner on Sunday, I was feared that if this pain increases it may ruin my whole trip that was the point when things started going out of control That was the point when I lost the control from my body and I was totally controlled by Fear of Pain instead of pain itself.
For the next two days I was suffering from the algophobia as doctors termed it.

As soon as I was coming closer to my home I was getting the feeling that pain is not a big deal I can just take a pain killer injection and everything will be fine in few minutes as doctors in India are different from doctors of Germany, My insurance was going to work in my country and even fear of a huge bill was not there so the fear of pain was just not there and I was healthy.

AS I am writing these lines I am feeling perfectly fine, had taken a good meal in the evening, drove my car for more than 150 km on the highway with my wife and children and YES everything is fine.

People who fear pain are more likely to suffer it